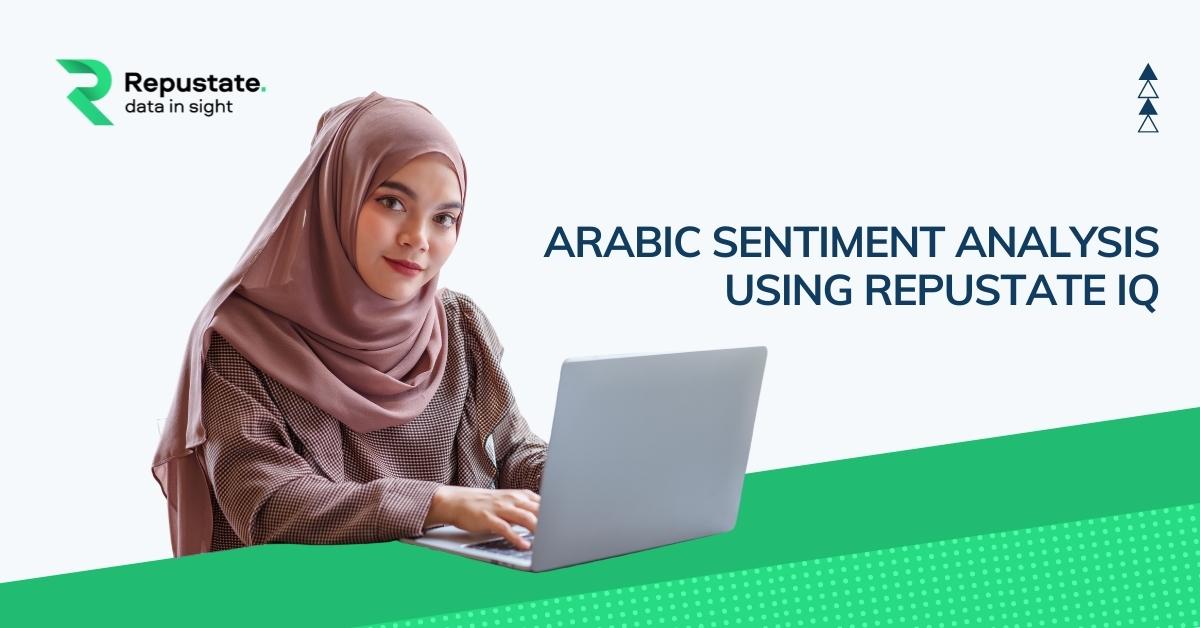 Arabic sentiment analysis is a very valuable business intelligence tool in the Arab world. It is one of the regions with the most social media activity, be it on Twitter, Facebook, or TikTok. Companies can mine valuable customer insights about various facets, right from consumer brands to healthcare, to aspects in politics and environmental research.

In this article, we tell you how brands can leverage Arabic NLP through Repustate IQ to get intelligent market insights. You will also see how Repustate IQ gives the most accurate sentiment insights, thanks to its native Arabic-reading capabilities, setting it apart from all other similar platforms in the market.

Repustate IQ reads and understands Standard Arabic and three of its dialects - Gulf Peninsular, Levantine, and Egyptian. It has its own dedicated Arabic lemmatizer, part-of-speech tagger, and sentiment models for each industry. This is what helps it conduct Arabic sentiment analysis through Arabic NLP to understand the semantics in Arabic text and give it a sentiment score. Whether you are looking for TikTok insights or voice of the customer (VoC) analysis, the engine gives you the results you are looking for.

For this example, we will analyze patient voice data that is in Arabic. 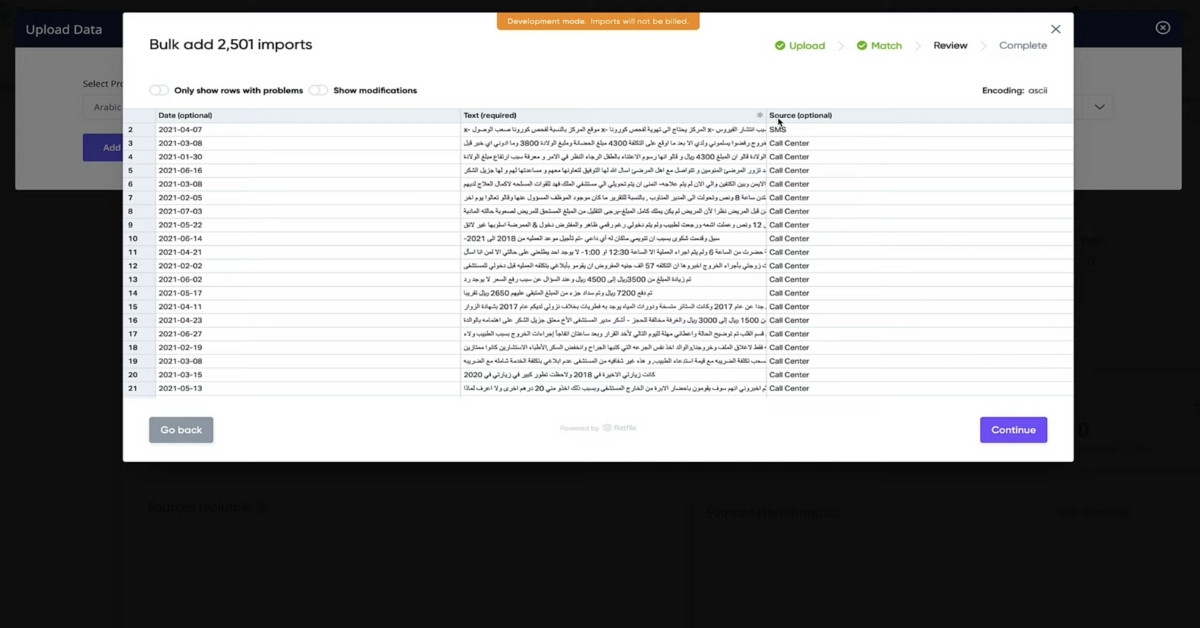 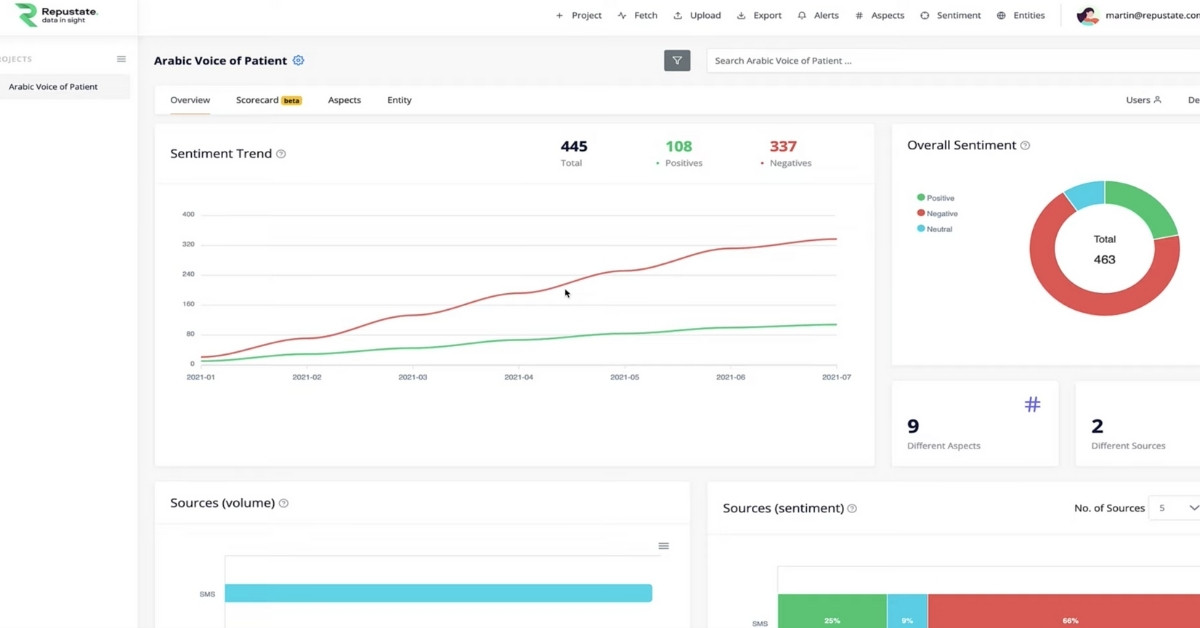 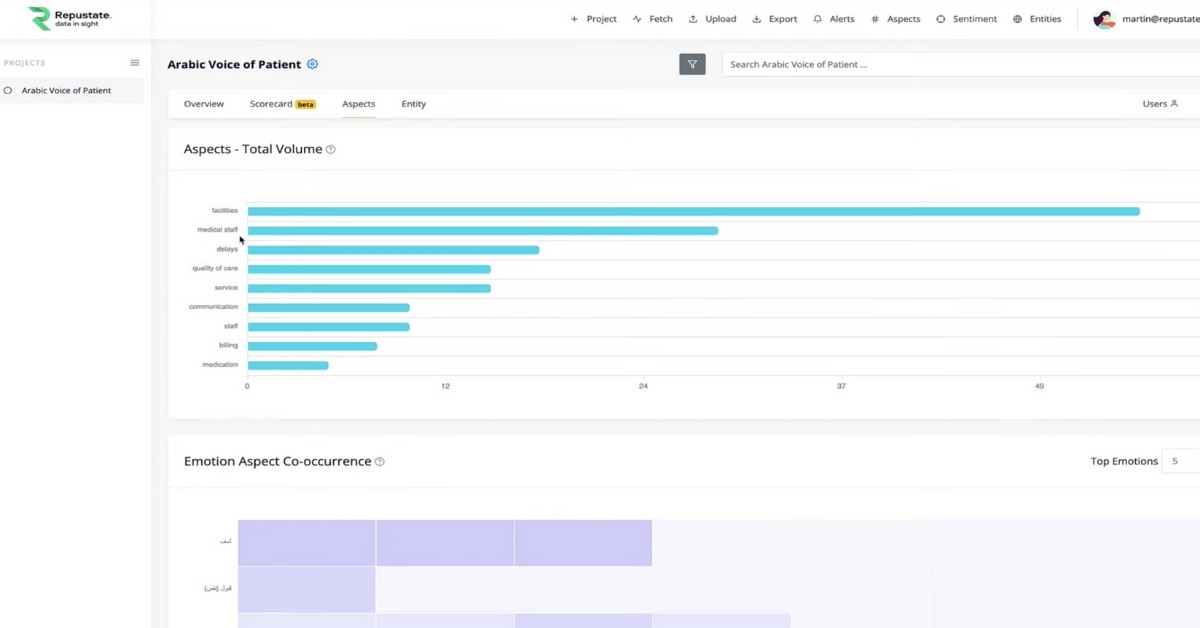 In this way, Repustate IQ natively analyzes Arabic data without using any translations so that you can get the most accurate insights from your patient, customer, or employee data.

A very important aspect of Repustate IQ’s Arabic sentiment analysis solution is its encoded Arabic speech tagger, which carries all the nuances, differences, and uniqueness of the Arabic language, making it completely independent of any need for translation. Data scientists at Repustate have developed the named entity recognition (NER) capability and Arabic speech tagger, along with lemmatization and prior polarity, manually - a process that required hours of diligence and efficiency. There are no shortcuts to get the kind of accuracy that Repustate IQ gives.

You have the freedom to choose whatever source of data you need including surveys, reviews, comments, blog, podcasts, social media videos, patient voice data, voice of the employee data, news, online magazine, and many more. This means that your consumer experience insights will be as in-depth and accurate as possible so you can build an effective, data-backed consumer experience strategy.

What are the Major challenges In Arabic Text Mining? 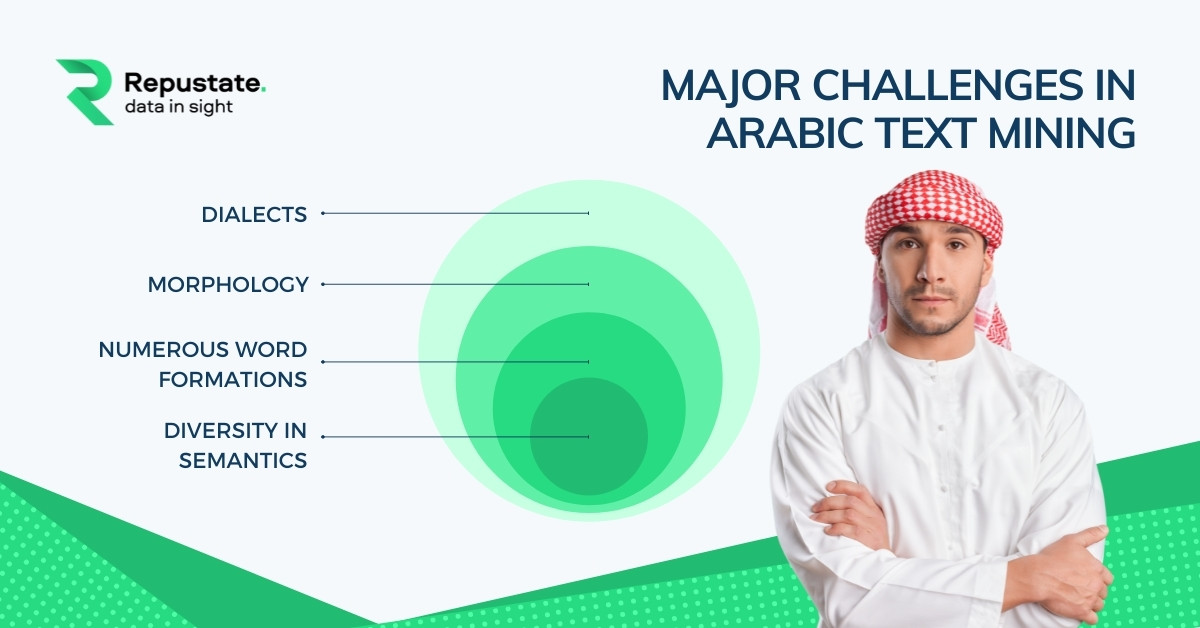 Arabic is a very complex language, with over 25 dialects, the most commonly spoken being Gulf Peninsula, Egyptian, and Levantine.

The Arabic language comprises derivational morphology or word formations, and inflectional morphology, which is how syntaxes and words are related. There are many integrated dependencies that morphological features have based on word affixes, vowels or word root structures.

Arabic’s high ability for new word formations with rich semantic meanings - all pose quite a challenge for Arabic NLP (natural language processing). The sentiment mining tool needs to be updated on a regular basis, akin to updating a dictionary, to keep adding the new words for their semantic and literal meaning.

Semantically related words generated from the root of a word ”اقرأ“ (read) can also be diverse, such as ” مكتبة” (library) or “جريدة” (newspaper). This means that the permutations and combinations of Arabic words can be endless.

How Do We Do Arabic Sentiment Analysis Without Translations?

There are 6 essential steps that need to be done to achieve native Arabic sentiment analysis from Arabic data. Through machine learning tasks that include Arabic NLP, all Arabic data is processed for hidden insights and then shown on a sentiment visualization dashboard. Below we explain the steps.

We collect a vast and varied Arabic corpus or data that is manually tagged. The more diverse the data is, the more efficient and accurate the results from the machine learning model will be.

We build an Arabic part-of-speech tagger keeping in mind all the morphological derivatives, conjunctions, prepositional phrases, word roots, etc. This speech tagger differentiates Repustate IQ’s Arabic NLP from other platforms in the market.

In this step, lemmatization is done by applying the rules of conjugating nouns and verbs based on tense, root word, gender, and such.

In this step, we determine the polarity of a word. Great could be +1, fair +0.5, and bad as -0.5. This is how the emotions in a comment or text will be analyzed for Arabic sentiment analysis. Ultimately, after calculating all the hundreds of comments, an aggregate score ranging from 0 to 100, 100 being the highest positive score, will be given to the brand the analysis is about.

Grammatical constructs are determined for Arabic NLP since Arabic has very different rules of negations and the such compared to other languages.

In this step the machine learning model is fed the sentiment scores for each aspect, feature, or entity. This can be as in-depth as required. The answers will be compared with a validation dataset, and the model retrained if required until it gives the closest, most accurate sentiment scores. All these findings are thus shown in a sentiment analysis dashboard.

If the Arabic data source is video-based, Repusate IQ’s video content analysis will analyze that too for the most accurate scores.

As mentioned above, the machine learning model needs to be trained on Arabic NLP using wide and diverse Arabic datasets in order to get the most accurate Arabic sentiment analysis results.

Here are some datasets that can help you.

Arabic sentiment mining platforms need to analyze Arabic data directly in Arabic in order to get the most accurate insights. Choosing a tool that resorts to translations of the text to English or any other language first, will be a bad decision as this means that none of the insights will be accurate, and more importantly, missing valuable information. Experience Repustate IQ’s Arabic sentiment analysis.