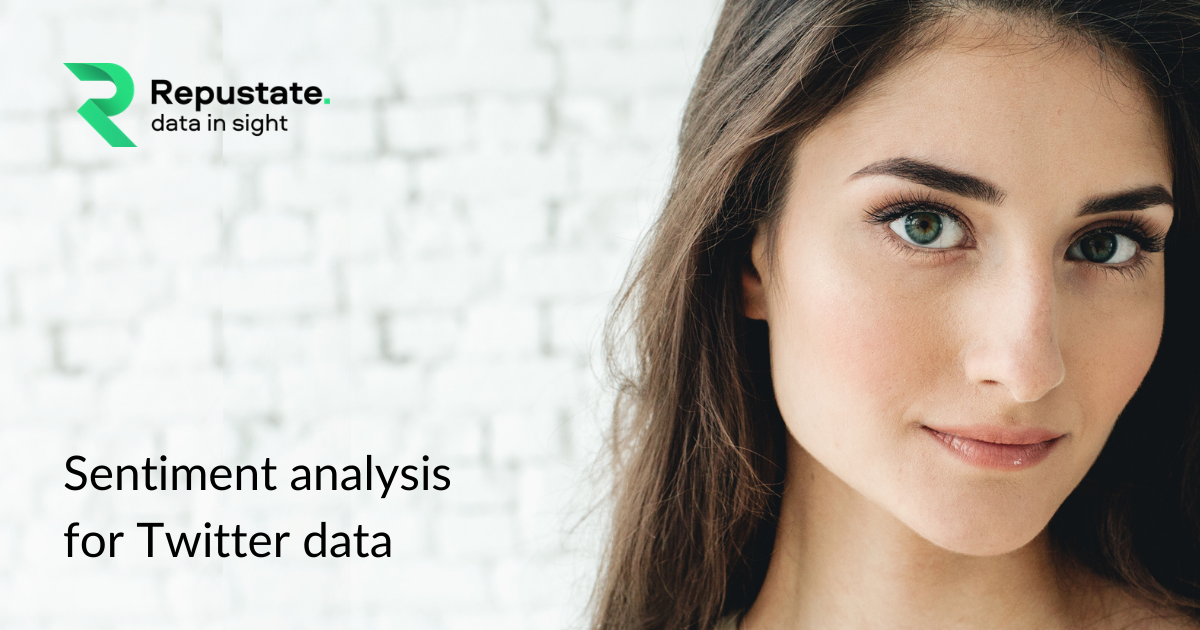 Learn how these insights helped them increase productivity, customer loyalty, and sales revenue.

The other day I was driving to the cottage with my son when I asked if he wanted to stop off and grab a Subway sandwich. He blurted “no, didn’t you hear, their buns are basically cake, with all the sugar that’s in them.” I guess I had my head too deeply buried in my work to have caught one of the biggest brand PR crises of the year. Ireland’s Supreme Court had just ruled that bread sold by Subway contains so much sugar that it cannot be legally defined as bread. When you’re a brand like Subway, who’s built its customer trust on being “a healthy alternative” to its higher calorie competitors, this type of breach can ultimately obliterate your bottom line. This got me thinking about the impact that a public sentiment catastrophe can have on a big, privately held company like Subway and lead me to check the change in its brand sentiment from twitter.

Sentiment Analysis: how do your consumers feel about your brand?

We live in a consumer era fueled by social media, transparency and 24/7 digital dialogue. Brands always want to know what consumers are saying about them on Facebook, Twitter or Instagram. That’s why many of the world’s top brands use social media listening and monitoring. It’s essential for them to understand the feelings, opinions and motivations of their customers. By understanding these sentiments, they can make data-driven decisions to strategically improve their products, services, customer experience and marketing. Basically, negative consumer feelings drive change. They often light a fire under organizations that fail to innovate quick enough. The more businesses know about their customers, the better they can make the changes necessary to serve them in a better, more personalized way. That’s where sentiment analysis comes in.

Sentiment analysis is simply the process of identifying and scoring peoples’ feelings expressed through any form of text data as positive (+1), neutral (0), or positive (1). Sentiment analysis powered by text analytics can be used to comprehend consumer feelings and motivations in social media posts, survey answers, customer service tickets and live chat logues. To do this quickly and easily, social media listening requires automated sentiment analysis tools to gather, process and visualize the sentiment with social media feeds like Twitter data sets.

To scrape and gather data from Twitter, there are a bunch of free tools you can use like Tweepy, Octoparse, Selenium or Twython. The most important part of the sentiment analysis of Twitter social posts is the actual extraction and sentiment scoring of text chunks. To do this you can use a tool like Repsutate’s Text Analytics API to perform very granular topic or aspect based sentiment analysis. It is these forms of semantic analysis that are the backbone of effective Twitter analysis.

From its earliest days, Twitter has been seen as the social media’s home for news, journalistic chatter and business analysis. Over the last 5 years, younger, more exciting social media platforms such as Instagram, SnapChat and TikTok, appear to have stolen the shine from Twitter, their older, more established adversary. Yet, with 330-million monthly active users, 500 million tweets posted every single day, and 23 percent of the internet population claiming to be on Twitter, this social media platform is no slouch. Add this to the fact that 67 percent of all B2B businesses use Twitter as a digital marketing tool, and the idea of Twitter’s obsolescence quickly fades. Twitter remains a treasure trove of consumer insights for thousands of brands including such biggies as Nike, Apple and Starbucks. So when we applied text mining to tweets, to better understand Subway’s recent media storm, important sentiment trends and brand insights became immediately evident.

Subway Twitter Sentiment Analysis: When your brand hits the fan.

Last Tuesday, a 14-year legal battle in Ireland ended with the verdict that the bread buns used by Subway Sandwiches to make their subs are not legally bread. Now you might think that this graphical presentation isn’t such a big deal as it sounds like nothing more than semantics mixed in with a bit of mathematics used to determine percentages and ratios. Yet, when you are a brand like Subway Sandwiches, a brand that prides itself on offering patrons healthy choices, this means potential market disaster. This is a brand unfortunately haunted by PR nightmares. Remember “Jared” their former spokesperson, the convicted sex offender? Or the “less than 12-inch” foot-long bun? Will this Subway “bread or cake” controversy be of the same negative magnitude as “Jared the sex offender”? Probably not, and here’s why.

By using Repsutate’s Text Analytics API we conducted a Twitter sentiment analysis using the query “Subway sandwiches bread” for the 2 days following the verdict. Here is a quick snapshot of what we found: 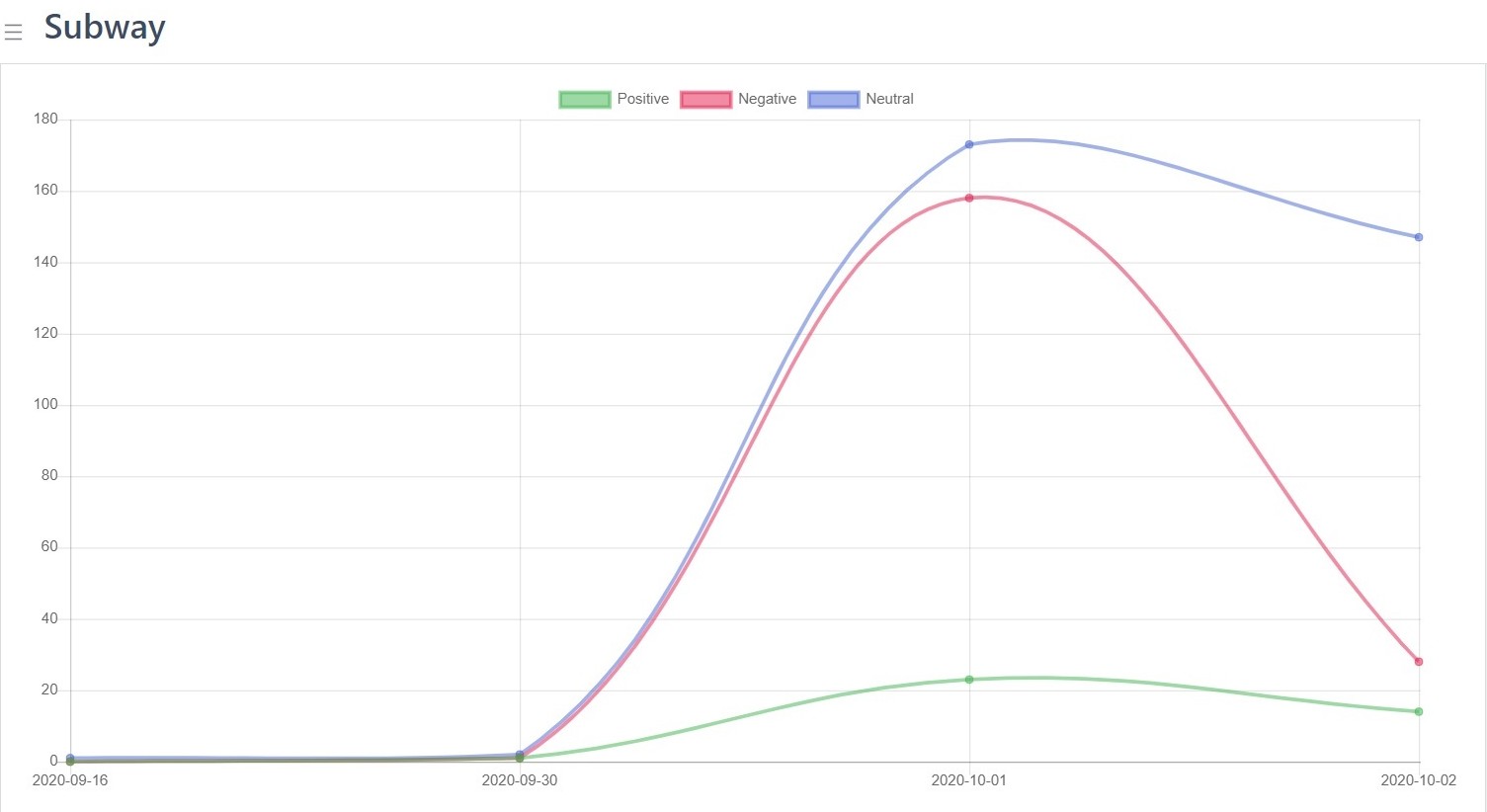 We analyzed about 500 tweets between September 29, the day after the announcement, and October 1, and found that negative sentiment with consumers and the media spiked exponentially just following the verdict but dissipated quickly just 2 days later. This was probably due to: 1) the fact that it was a very geographically specific verdict, but with possible international ripple effects, and 2) it probably didn’t surprise too many people that the buns used by a fast food restaurant has a higher sugar content than regular bread.

We also used our named entity recognition capabilities to discover that the main entities mentioned in these posts other than those found in the query were sugar, Irish and baguette. Cake was mentioned 20 times.This suggests that Twitter users who posted on this issue had their sights squarely set on the topic of the potential health effects of a high-sugar diet. Oddly “obesity” was never mentioned.

Strategically the Twitter sentiment data tells us that although Subway Sandwiches doesn’t necessarily need to do too much crisis management about this controversy, it should try to restore any loss in consumer trust by offering a new low sugar bun option in the near future. This new product launch could be accompanied by an ad campaign to ensure that the public recognizes their willingness to immediately address any customer concerns.

The Benefits of Text Analytics and Twitter Sentiment Analysis

Analysing tweets for sentiment remains an essential marketing exercise for any company looking to listen and learn from the experiences of its customers. Aside from social listening, Repsutate’s Text Analytics API can also assist companies in mining Twitter for business intelligence, opinions, brand insights, voice of customer, and online reputation management.

With sentiment analytic tools like Repustate, you’ll quickly analyze a reasonable number of tweets talking about your brand or business. Also, the tasks you should have done manually will be easily automated. Sentiment analysis tools help you grow your valuable data and gain valuable insight on the spot.

Using sentiment analysis tools helps you maneuver several inconsistencies that could arise from several agents, tagging your data against different criteria. It is an automated technique that trains a machine learning model to handle all the tasks for you with your twitter data. This will, in turn, make all the results consistent.

As mentioned earlier, twitter sentiment analysis provides an excellent opportunity for businesses to understand how your customers feel and think about your products or features. In addition to creating another layer to the traditional metrics to evaluate your brand’s performance, it also provides you with several other opportunities.

Of course, the traditional method of performing sentiment analysis is possible. But what happens when your data starts to grow or the cost of manual tasks outweighs the investment in automation? Sentiment analysis with machine learning is simple, fast, and accurate. Apart from that, it provides consistent results with a relatively high accuracy level.

When it comes to social media tracking, there are a whole lot of different tools out there. But, Repustate is clearly different. Why? We use Artificial Intelligence (AI) to model natural language accurately. Whether you are experienced in coding or not, our sentiment analysis API will seamlessly handle all your sentiment analytics tasks.

At Repustate, we create AI technology that features language-specific models that can detect sentiment and disambiguate named entities from various sources, including social media, news, surveys, and feedback forms.

With Repustate, you can understand your data, customers, & employees with 12X the speed and accuracy.

The implementation was seamless thanks to their developer friendly API and great documentation. Whenever our team had questions, Repustate provided fast, responsive support to ensure our questions and concerns were never left hanging.

We tried many vendors whose speed and accuracy were not as good as Repustate's. Arabic text data is not easy to mine for insight, but with Repustate we have found a technology partner who is a true expert in the field.

We are very satisfied with the accuracy of Repustate's Arabic sentiment analysis, as well as their and support which helped us to successfully deliver the requirements of our clients in the government and private sector.

We were blown away by the fact that they were able to put together a demo using our own YouTube channels on just a couple of days notice. What really stood out was the built-in semantic search capability.