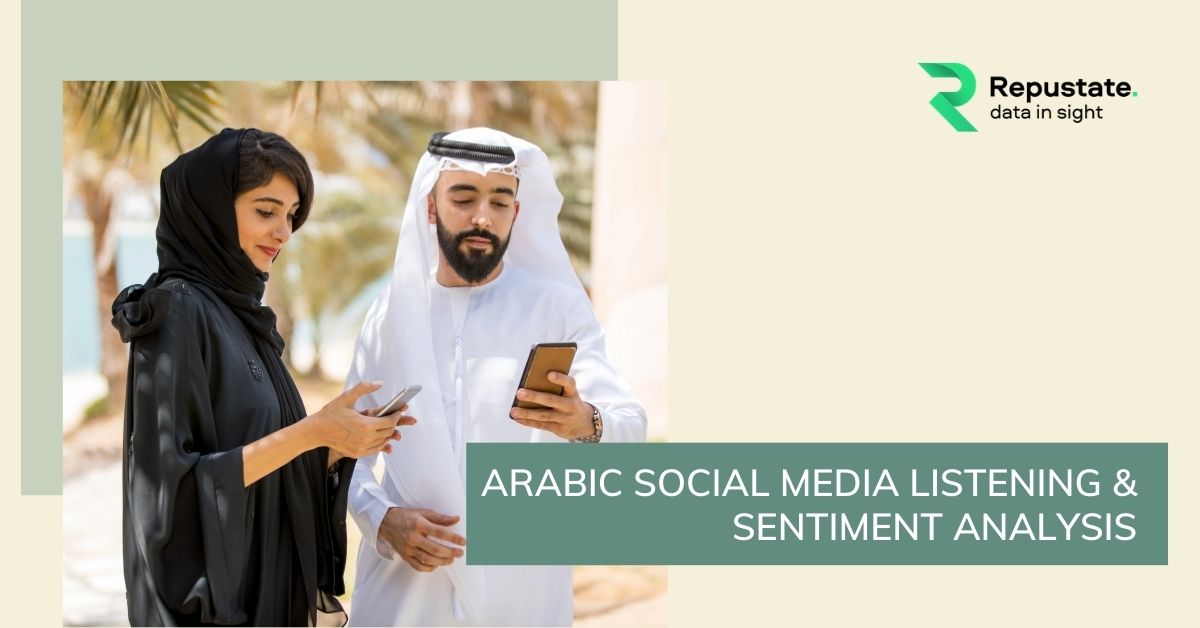 To best understand their customers, companies must analyze the original languages they express themselves in through social posts, online reviews, and customer surveys. There are few areas of the globe where this is more true than in the Arabic speaking world, especially in the Middle East and North Africa. There are over 300-million Arab speaking people globally. Yet, understanding formal Arabic is challenging enough, once you layer on that there are over 30 Arabic dialects, intermingled with English and sprinkled with street language, then you begin to understand one of social media listening’s greatest linguistic challenges. Understanding Arabic consumers requires a unique approach and a special set of text mining and sentiment analysis tools.

Social media listening and sentiment analysis allow brands the opportunity to know what consumers are saying about their products and experiences, and how they feel about them. Are mentions positive, negative or just meh? Are they mostly about price, product, quality or customer service? These types of insights can help brands improve their offerings, increase sales and drive market share.

Sounds easy? It’s not. Social media is the internet’s playground and laboratory for the use, misuse, and creative shaping of everyday language. It’s a place where people go to communicate, not to properly conjugate verbs. Social media is both blessed and damned by linguistic nuance. Its abundance of slang, acronyms, idioms, homonyms, misspellings, sarcasm, emojis, emoticons, and neologisms often make it hard for not only humans but machines as well, to comprehend what is being said in social posts. What is an even bigger challenge to social media listening companies is interpreting social posts written in languages other than English, and then in one regional dialect of another for those languages.

What are Arabic Dialects?

There over 30 Arabic dialects derived from what is called Modern Standard Arabic. Modern Standard Arabic, or MSA for short, is the standard version of Arabic, often referred to as Classical Arabic, or the Arabic of the Quran. It is taught in schools and is usually used in formal writing and speech. Literature and poetry, especially earlier forms, are written in MSA. It is often found in business, books, newspapers, and other mass media, but not necessarily social media where dialects appear more frequently. Considered the official language of more than 20 countries, it is spoken by over 300-million people globally. Dialects are variations of MSA usually rooted in geo-regional dialogue patterns in conversational language. These vernacular or colloquial dialects often possess different grammars, vocabularies, semantics, and syntax.

Which are the most used Arabic dialects?

Many can be understood by speakers of other Arabic dialects, while some differ so significantly that they are barely recognizable. Here are just a few of the largest Arabic language variations used by around 35% of the Arabic speakers:

Gulf or Peninsular Arabic refers to the several varieties of Arabic spoken by people in the Arabian Peninsula. This type of Arabic is used by over 7-million people for everyday conversations and social media in countries such as Saudi Arabia, Yemen, and the United Arab Emirates. One can also find it being used on Twitter and other social media in Bahrain, Qatar, and Kuwait.

Egyptian Arabic is the most widely spoken and studied Arabic dialect with a total of 68-million speakers in Egypt. It is also spoken in those countries where Egyptians have migrated especially throughout North Africa and the Middle East. Although the dialect shares the same vocabulary as Modern Standard Arabic, it’s grammar and sentence structure are different.

Levantine Arabic has two different varieties and is used in the Eastern part of the Middle East. North Levantine Arabic is spoken in countries such as Syria and Lebanon. On the other hand, the South Levantine variety is used across Israel, Jordan, and Palestine. This vernacular language is used by 30-million people worldwide.

These dialects, as well as 20 others, are used by Arab speakers across social media to varying degrees, often mixed with MSA, English, and other languages such as French in the case of Morocco or Tunisia. Social media listening and sentiment analysis look to understand these dialects using a combination of artificial intelligence, machine learning, and expertise in natural language processing (NLP). This provides brands the opportunity to extract insights from Arabic, a language dense with dialects and complexity.

Social Media Use in the Middle East: 10 Stats You Should Know!

One of the greatest errors made by marketers and researchers looking for brand insights is the belief that Arabic speakers do not use social media. The reality is that they are heavy users of social media. Here are 10 important statistics from 2019 on social media use in the Middle East and North Africa that quickly dispel that myth:

Thus far we have shown the challenges posed to Arabic sentiment analysis by various dialects of the language. In addition, it is clearer now that the Middle East and North Africa provide a treasure of consumer and brand insights as expressed through social media. Next, we will look into how Repustate’s Arabic Text Analytics API provides companies and brands to fully leverage Arabic text data at their disposal if they look to grow market share in the area.

Should translations be used for Arabic sentiment analysis?

Arabic is a unique language and it differs from English in a number of ways: from sentence structure to words and phrases that may be used differently, using the same techniques and language models that work for English sentiment analysis when conducting Arabic sentiment analysis would yield terribly inaccurate results.

What are the basic steps in Arabic sentiment analysis?

The larger the corpus, and more importantly, the more varied the corpus, the better the results in creating the Arabic part-of-speech tagger. Repustate has created a massive corpus of Arabic text grabbing data from a variety of sources to ensure good coverage. Taking it a step further, by using Arabic Named Entity Recognition with the advanced semantic search for enterprises, we can identify brand and business entities in data. No matter how misspelled a word is, our API will reproduce the first name in native script and thus improve the accuracy of name searching, transliteration, and the grade of identity verification initiatives. This gives high accuracy ranked results, on the basis of the linguistic, phonetic, and specific cultural variation patterns of the names

Repustate has developed sentiment language models specific to Arabic to capture the various phrases, idioms, and expressions that help define sentiment when writing in Arabic. Understanding the various grammatical aspects of the Arabic language that make it unique and very different from English is what allows Repustate’s Arabic sentiment analysis to be as fast and as accurate as it is.

What are the benefits of Repustate’s Arabic Sentiment Analytics Tool?

Here are the benefits of using our sentiment analyses tool:

Give your Arabic Customers a Voice

Get fast, reliable, and accurate results every time, no matter what language your customers speak, be it Arabic, Turkish, French or English. Our multilingual sentiment analysis solution understands and can effectively process information in over 23 different languages.